Have you ever played a golf course so tough that it made you or somebody in your foursome throw up? More on that in a bit…

CaddyTips was recently given the opportunity to play Bethpage Black course a day after the final round of the 2019 PGA championship with the same conditions as Sunday (same tees although our group opted to play one up several times throughout the round, same pin locations, same two club wind and more importantly same length of rough). Now as a Californian that had never even been to Bethpage State Park, my misconception of the infamous “WARNING” plaque was one . Don’t tell me how hard the golf course is, let the course do the talking. The course did more than speak; it climbed up the Empire State building pounded its chest and roared ferociously.

When I first arrived on the grounds I was whisked away to the massive merch tent which was hosting a 50% OFF fire sale. I was -1 and I hadn’t even teed off yet! I put that CaddyTips corp plastic to good use and picked up some beauties that we used for some Instagram giveaways – stay tuned, more Bethpage contests to come.

Then we rushed to the first tee where it became stingily obvious it was a balmy 87 degrees out, real NY golf weather. I was going to get the full experience, buckle up! The PGA of America arranged for caddies so we could walk the course – there are no carts allowed and I learned that most of the players at Bethpage carry their own clubs and some use push carts. I was under the impression that all the push carts had been shipped and stored in Warren, New Jersey for this event as there was no signs that the course had seen a push cart in months. After a couple practice swings, it was time, peg it and go! I took a similar line that I saw the pros take over the two plum-colored trees and while my ball started on this line, I hit it a bit on the toe and the flight took a slightly different direction from the pronounced curvature of the hole. Now, I’m not going to go through every hole shot-by-shot like our detailed tips, but what happened next was indicative of the experience and needs to be chronicled as it seems to be the story I have told the most since playing Black. 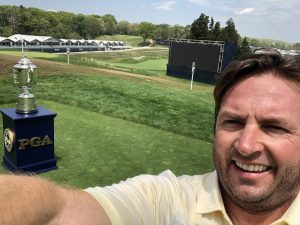 My ball had landed in the fairway, bounced twice and then disappeared into the rough very close to where the hole begins to dogleg. It took my young caddy and I about a minute before we finally got right on top of the ball, a common theme for the day, and spotted the horrific lie. Deeper than the minds of Minolta. Ummm, ok, it’s gonna be like that huh? I was 144 yards out to the back pin so I figured if I clubbed up to 170 I most certainly could run something up the middle opening of the green. I choked down, kept my head still, came down at the perfect angle of attack and executed what I thought was the perfect swing for the conditions. The second my leading edge interacted with the turf, it was full flaps; the club got completely stuck and the ball lazily flew twenty yards down the fairway. As I regained my composure these words came rushing into “Warning, The Black Course Is An Extremely Difficult Course Which We Recommend Only For Highly Skilled Golfers.” 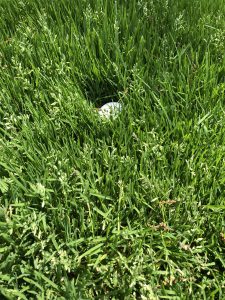 So, what did he shoot you might be thinking. Never mind that, let’s focus on the golf course. There is nothing I can write about Bethpage Black that hasn’t been put in print already like it’s a complete masterpiece of golf course design and architecture. The layout is long and winding with no houses and most of the holes are isolated. The green complexes are subtle and brilliant. The aesthetics of the course with its brilliantly placed fairway bunkers, ancient trees and whispey native grass areas are as delicious to a golfer’s eye as Chiprianis gnocchi is to Robert Deniro. The Empire State deserves an Empire Golf Course. 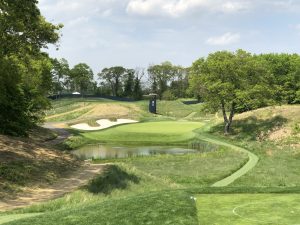 I took the chance to print out our Bethpage Black CaddyTips and battle test them under these championship conditions and I was proud. D-Dog, co-founder of CaddyTips had ventured out to Bethpage and did the whole experience of sleeping in the car to snag a tee time and under the tootiladge of a friend of his who had caddied in several tournaments at Black. Rafted some really solid tips. I was proud of the accuracy, attention to detail and all around experience using the tips. Vilification of our process gave me the extra confidence I needed to get around the “Bethpage Black Attack.”

Ok, one last antidote and then we will return you to your regularly scheduled program. I played with a really great group of young media sales guys out of NYC (it was Media Day for goodness sakes) and they were golf junkies so we got along famously. One of the guys claimed to be a 16 handicap; one of his swing flaws was right at impact he came WAY up and out of it, so he had absolutely zero chance out of the punishing rough that forced you to hit down and through to power it out. And he couldn’t hit a fairway…see where I am going here. He had no chance. By the 13th hole, he was a beaten man, tired, red, bothered, beaten man. Because of the heat, we slugged down whatever water was available to us. He chugged a bottle of water as we walked up the fairway on 13 and started to sweat profusely. “Are you ok Billy?” Asked one of his buddies. “I don’t feel well and I think I am going to be sick. That water did not sit well with me.” The water did not sit well with him? It’s nearly 90 degrees.

It soon became clear he was not going to finish the hole. His caddy gave him his putter and driver for the next hole and pointed him to a bathroom located behind the green.

Being a caddie has much responsibility. Especially when your meeting people for the first time each day. Changing colors like a chameleon is the best way to explain the way. Read, watch, and then reflect. You can take your time with who you are, or just tell them like it is. The best way is to just give advice with confidence. No one needs a suck-up!! Ass kissers never win in the end. They sleep walk through the round and continue to rake bunkers because of bad advice. Never forget that the “Shadow” has one of the best jobs on the planet. To walk gods green earth and give advice to those that need it. Be humble yet cocky. Never step over the line unless they are over served! Enjoy the ride, it’s a gift to be pleasured by a gentlemen’s game. To assist a player with the best advice along his or hers journey is spiritual. Give the gift of happiness even when your a SHADOW!

Monterey Peninsula is widely right now as the Mecca of Golf in the United States and is home to some of golf‘s greatest treasures including Pebble Beach Golf Links, Cypress Point Golf Club, Spyglass Hill, the PGA Tour’s AT&T National Pro-Am, the Northern California Golf Association headquarters at Poppy Hills Golf Course and Monterey Peninsula Country Club. The USGA has held the U.S. Open at Pebble Beach on five different occasions and this summer (2019) will be hosting it’s fifth on the Centennial anniversary of Pebble Beach. The 1977 PGA championship was also hosted at Pebble Beach; the list of accolades go on and on.

Pebble Beach Company also is home of one of the strongest caddy programs in the United States with over 300 professional caddies that work as independent contractors for the company spread out over four golf courses: Pebble Beach Golf Links, Spyglass Hill Golf Course, The Links at Spanish Bay and Del Monte Golf Course. The Pebble Beach company takes great pride in fostering and maintaining one of the best caddy programs in United States. According to Tim Tipton, who has been caddying at Pebble Beach for over fifteen years now, all caddies are required to complete an initial face-to-face interview, a background check and a one-week training program on and off the course. And here is a little tip for those of you playing the Pebble Beach Company golf courses and looking for the best caddies: book an early tee time as there is a pecking order or seniority in the caddy shack and the most seasoned veteran caddies get to go out first!

The Pebble Beach Company caddy program is a very special institution for CaddyTips, as both co-founders used to be employed there. In 1994, Darian Shingu began caddying out at Spyglass Hill; Darian was an accomplished junior golfer winning the AT&T Junior of the Year Scholarship Award any playing four years on the competitive Stevenson varsity golf team (One of which included an MVP season). Through out the 90s and early 2000s, Darian caddied hundreds of times at Spyglass Hill, Pebble Beach, Spanish Bay and Del Monte. In 1996 as a summer job while home from college, co-founder Benn McCallister got a job caddying at Spyglass Hill. He would spend the next several summers caddying alongside with Darian. Typically after caddying for nearly 5 hours, they would throw their clubs in the back of the car and go play golf until the sun set at places like San Juan Oaks, Poppy Hills, Carmel Valley Ranch and Pacific Grove Municipal Golf Course. It was during these early years that the foundation of CaddyTips was established. The two would take notes on golf courses and share them frequently with each other creating booklets and tips on how to shoot their best scores.

Needless to say, Pebble Beach hold a very special heart very special place in the heart of CaddyTips . Between the two of them, Benn and Darian have revised the tips for Spyglass, Pebble Beach and Spanish numerous times as the magnum opus of their work with CaddyTips. Both of them credit their early years and knowledge that they gained in the Pebble Beach Company caddy program as the core of their golf course knowledge and strategy and also consider this period of time the genesis for the CaddyTips concept. Both co-founders will be attending the 2019 U.S. Open at Pebble Beach blogging in creating unique content for CaddyTips aficionados. Stay tuned!

We Accept the Following forms of Payment: